You are here:
Ethical News 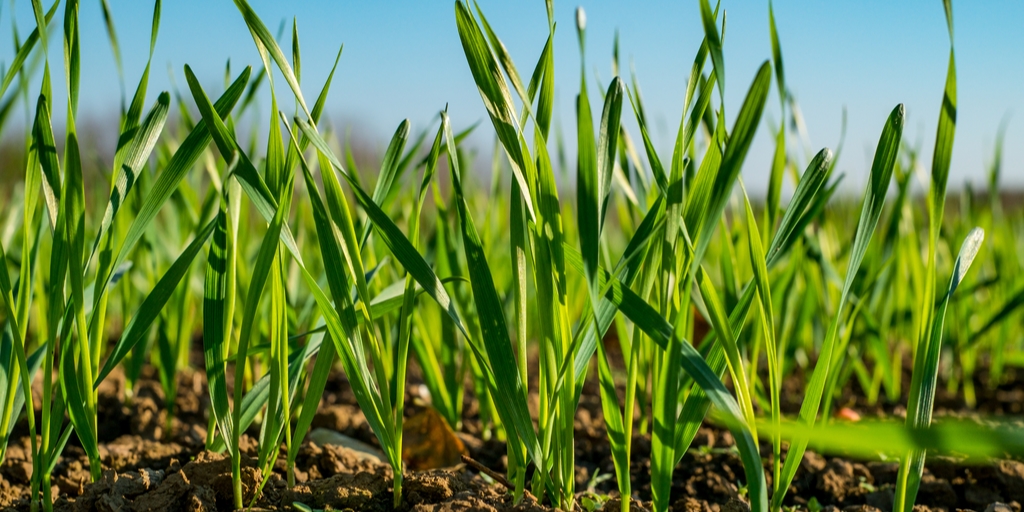 As companies and markets respond to the growing popularity of veganism, it raises fascinating questions – not just for vegans, but for anyone with an interest in ethical investment.

Many people – including Andy here at Investing Ethically – took part in Veganuary earlier this year.  The annual campaign has made great strides – from a few thousand participants when it launched in 2014 – to over 400,000 this year (including 50,000 from the USA).  In general, veganism has moved from being somewhat ‘niche’, to being increasingly mainstream.  The Vegan Society estimates that there are now some 600,000 vegans in the UK; and that vegans and vegetarians are set to make-up a quarter of the British population by 2025.  Recently, an employment tribunal identified that ‘ethical veganism’ – seeking to avoid all forms of animal exploitation – is a philosophical belief protected by employment law.

The arguments in favour of veganism are increasingly broad…

Many people are motivated by a concern for the lives of animals.  There is also now widespread acceptance of the imperative for the world to move to a more plant-based diet…. including issues of climate change, land and water use, pollution, and human health.  It is estimated that beef production creates some 20 times the greenhouse gas emissions of equivalent plant-based proteins; and yet – as both the population and the size of the middle-classes increases globally – demand for beef is anticipated to grow considerably over coming decades.  A major study, in the scientific journal Nature in 2018, concluded that a global shift to a ‘flexitarian’ diet was needed if global temperature rise is to be kept below 2°C: richer Western countries will need to cut beef by 90% and milk by 60%, and increase consumption of pulses and beans at least four-fold.

After a slow start, companies are rapidly catching-on to the demands and opportunities of the ‘vegan marketplace’ (although admittedly, much of this increased demand is driven by those adopting a more ‘flexitarian’ approach, not necessarily vegans or vegetarians).  In the food industry, there is huge interest in ‘non-animal’ protein.  The analysts Mintel reported that nearly a quarter of all food-products launched in 2019 carried the label ‘vegan’.  Similarly, Technavio recently estimated that the global ‘plant-based meat’ market is set to grow by over $3 Billion, at 15% a year, during 2020-2024.  Here in the UK, Greggs the bakers’ now famous vegan sausage roll has helped them to deliver record profits.

Another well-known example is the firm ‘Beyond Meat’, providing a range of meat-substitutes for home-cooking, restaurants and take-away.  It attracted huge attention when it went public in 2019 – with ‘celebrity’ investors including Bill Gates – and stock prices rose astronomically at its Initial Public Offering (rising from $25 to nearly $240 in a couple of months).  Although it subsequently fell-back, it still currently has market capitalisation of over $9 billion (although some analysts feel this is overpriced).  One of its main rivals – ‘Impossible Foods’ has recently signed a major deal to provide a plant-based ‘sausage’ sandwich as part of Starbucks breakfast range.  An interesting angle is that the take-up of meat alternatives is being accelerated by Covid-19 – because of rising concerns about ‘healthier living’ as well as specific issues affecting the meat supply chain (such as the recent mass infection at a German abattoir). 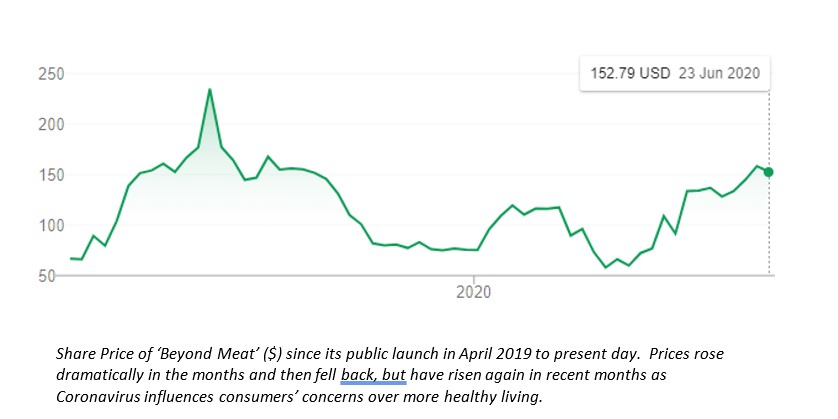 With the rise of meat-alternatives, whole new industries are being created.  For example, specialist companies now focus on improving the digestibility and the ‘flavour-profile’ of non-meat proteins; while others are focussing on ‘cellular agriculture’ – where ‘meat’ is cultured in laboratory-conditions, rather than coming from slaughtered animals.  As you might expect, there’s considerable debate about whether such lab-grown protein is vegan or not!  Recent years have also seen rapid growth in vegan restaurant and catering business and – outside the food industry – in clothing, cosmetics and other consumables.

What are the options now for vegan investors?  Does the growth of veganism – and industry’s response – create new and clearer opportunities for vegans to invest their money in accordance with their beliefs?  Or – as this business (and its marketing budgets) continues to grow – does it become harder to ‘see the wood for the trees’ when making such investment decisions?  For example, there are some companies that manufacture only vegan products (nothing animal-derived and no animal-testing) – mainly ‘start-ups’ and some publicly-listed.  There are many more companies – such as Greggs or Ben & Jerry’s – who now include vegan brands in their wider-product range.  By providing and promoting these products, these companies could be seen as supporting a transition towards veganism (which should be encouraged) – but it cannot be argued the businesses are themselves vegan!  Readers will have their own opinions as to whether these companies are motivated by ethical concerns, or merely seeking to benefit from profit-opportunity…

…but – depending on the individual – these may or may not be robust-enough to meet their ethical standards (or advisable for their specific personal and financial circumstances).  For example, some might think the best vegan option is simply to leave their money in the bank (as cash or a cash ISA), where it can ‘do no harm’.  However, of course, most banks lend that money to companies – who then use it to do all sorts of things, with relatively little transparency.  Some banks do have more ethical lending policies.  The Coop – for example – will not provide banking services to companies involved in animal testing, intensive farming, or the degradation of endangered animal species’ habitats.  Alternatively, money held in building society accounts will be lent to enable home-buying – and is unlikely to be detrimental to animal welfare.  From an investor’s point of view, it’s important to consider that rates of return on cash in savings accounts are at historic lows.

For investments such as stocks & shares ISAs, pension plans, or general investments – there are now a wide-range of ethical funds available.  Here at Investing Ethically we engage with many of these funds and their managers (though some do not meet the standards we set).   We’ve liaised with a good number of these funds about veganism – both for this article and when working for specific vegan clients.  Most of the ethical funds share many of the general concerns of vegan investors: mitigating and adapting to climate change is, for example, a major driver of investment decisions.  There are funds which are sector-specific, such as those investing in technology, or water, or renewable-energy production.  The companies these funds invest in are not vegan per se; but they are relatively less likely to involve animals or animal products.  Some of the ethical funds do screen specifically on animal welfare – and make investments in ‘vegan companies’ such as Beyond Meat – although for some of these, positive animal welfare could include – for example – organic animal farming.  Other screening criteria might see the avoidance of related themes – such as supermarkets or genetic engineering.

One of the big distinguishing features between ethically screened investments funds is whether animal testing is screened out for pharmaceutical products as well as cosmetics.  Most ethically screened funds will screen for animal testing on cosmetics, which is obviously better than not screening for the issue at all, but most will allow testing for pharmaceuticals.  The main issue here is that in the UK all pharmaceuticals have to be tested on animals by law before they can go to market. The same is true for all medical testing equipment.  Herein lies a clear tension.  Many ethically screened funds will have a focus on healthcare as a theme that is seen to bring positive benefits to society.  In the fight against Coronavirus, companies such as Gilead Sciences, AstraZeneca and Johnson & Johnson are attracting fund managers’ attention, as they create an early ‘lead’ in developing and trialling vaccines.  However, their use of animal testing clearly rules out vegan investors.

Investing in Property funds presents other issues for vegans to consider.  Such funds aren’t ethically screened in the conventional sense.  However, the fact that they just invest in buildings – and the investor simply benefits from the increase in value and the rental income, means that in someways they can be viewed as being ethically ‘neutral’.  That said, as the spaces in these buildings are let and then sublet again, it means that it is impossible to police the nature of the actual businesses that end up operating out of them.  Although there is a move for UK based property funds to apply for the GRESB benchmark rating – where they are scored on a wide range of ethical issues including energy efficiency, environmental impact, and ties to the local community – there is no measure of the extent to which animal rights are considered.

The specifics of which funds would be most appropriate to which investors can be complicated; and one vegan-investor may well have different views to another (as well, of course, of the need to consider their individual financial and personal circumstances when making investment decisions).  It is interesting that even the ‘darkest green’ ethical funds we deal with are unlikely to claim to be ‘fully vegan’ – due to the difficulty of excluding all possible animal products in companies’ production and supply-chains, and the subtleties of what being a truly ‘vegan-company’ actually means.

For some vegan clients, an alternative to using existing Ethical Funds is a ‘bespoke portfolio’ with a Discretionary Fund Manager.  Here, a client is able to have a great degree of control on which companies are invested in.  Usually the advice process will start by establishing an ethical mandate for the client and a proposal is prepared based on this.  The proposal is then discussed with the client when they can make further refinements (i.e. weed out specific companies that do not meet their ethical concerns).  This way the investor has a much greater degree of agency than they would have with ethically screened funds.  The downside is that these solutions may be too expensive for many clients and the risk management is more challenging, as they are often significantly more volatile than more generic ethically screened funds.

The growth of veganism, and the general shift to a low- or no-meat diet, is stimulating new businesses and changing the behaviours of existing ones.  This, in turn, is creating wider choices for vegan investors, but the picture is complicated.  As with many ethical issues, things are not always clear-cut, and there is a real danger of ‘vegan-wash’.  It’s important to understand each individual’s specific concerns, as well as the inevitable tension there will be in addressing these and accounting for financial objectives.  If you are vegan, or simply moving towards a meat-free diet, and want to better understand your investment options, please feel free to contact us here at Investing Ethically.