Currency or Contempt? The Ethics of Cryptocurrency

You are here:
Ethical News

Does cryptocurrency have a place in the ethical space?

Our new graduate trainee Matthew Charles has recently completed his Master’s dissertation on the ethics of cryptocurrency – so who better to provide an introduction!

It’s important to stress that this article is simply a summary of a broader subject.  The content should not be viewed as a positive endorsement to invest in cryptocurrency or to refrain from it.  Many argue that cryptocurrencies do not meet the broadly accepted criteria needed of a recognised currency.  Their continued volatility is one such fundamental flaw, as a currency should behave in a more stable manner and so ‘crypto’ remains a highly speculative investment and not a currency or ‘safe haven’ in our opinion.

Cryptocurrency one of the hottest topics within the financial sector. Someone you know is probably talking about it. Or maybe you have just seen it blasted over the news, and rightly so, as some of the ‘assets’ in the crypto market have made people ludicrous returns. But what are cryptocurrencies and what ethical issues do they raise?

The idea is based around a decentralised electronic peer-to-peer online currency. Basically, a form of payment that isn’t controlled by a single individual, government or corporation and thrives on the usage of more users – the more users the quicker and more reliable the currency is.

Bitcoin was the first cryptocurrency and was developed to act as a payment mechanism for the online world; however, there are thousands of different crypto currencies used for an array of things, such as lending and borrowing or digital storage, although most people use it the way people invest in gold or diamonds, a store of value and to speculate on price movements, hoping for a large upside.

Three main areas which make up a crypto asset are:

Fundamentally crypto is supposed to be a secure, reliable, open, and reward driven asset to complement a technological society. But is this the case?

It could be said a currency that is open and not controlled by the government or bodies within a specific region could allow for a more inclusive and transparent financial sector, paving the way for investment and frictionless transactions globally, including for the most vulnerable in society. Monetary factors, such as the inability to access credit or bank accounts, have presented particular difficulties for many people and cryptocurrency could present an opportunity to change this, which we can all agree would be a good thing. However, what are the costs of achieving such a feat?

Energy consumption is one of the main concerns with cryptocurrency. This is not a surprise when Bitcoin has been known to consume more electricity than whole countries, shown by a study from the University of Cambridge.

Within China there have been crackdowns on the use of cryptocurrency and the mining linked to it. This has caused a shift in the market and moved mining organisations out of China and into places such as Kazakhstan. However, Kazakhstan is an area where fossil fuels are abundant, especially coal which makes up 90% of the nation’s electricity supply. In comparison the UK relies on fossil fuels for roughly 46% of its consumption, with coal being around 2% (National Grid, 2021). 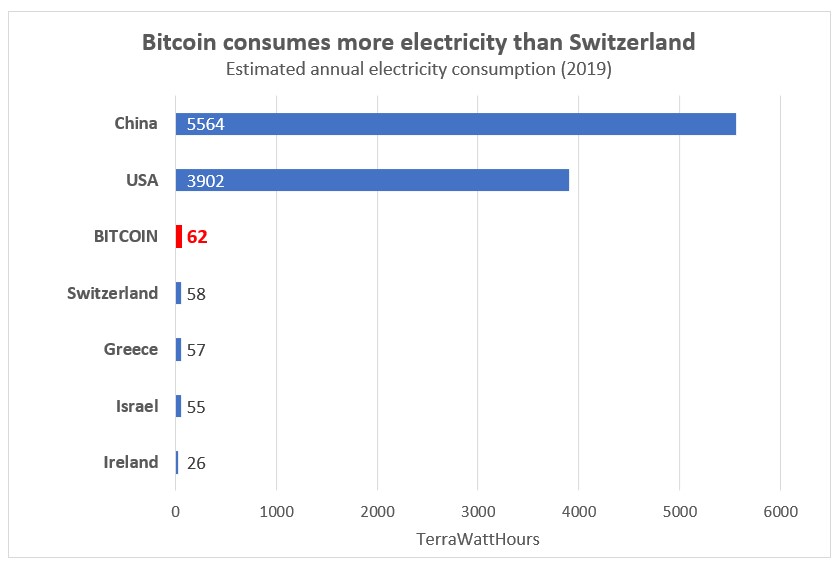 There have always been stories of how Bitcoin was first used for selling illegal substances and that the rise of crypto currencies has enabled a culture of online illegal activity and money laundering.

There are arguments that suggest crypto currency is less energy consuming than the traditional banking system, for example ARK Investment Management conducted a study that found Bitcoin to consume less than 10% of what the traditional banking system uses (Elmandjra, 2021). Even though the traditional banking system serves far more people, crypto currency is in the early stages of adoption and like any industry the early infrastructure stage is more intensive. Nevertheless, the current consumption of electricity is way beyond the powers of being fully sustainable at the current time. We are starting to see the first companies, such as Argo Blockchain, who are a blockchain company and crypto currency miner, but using only energy generated from their own power sources such as hydro and solar energy. Argo are considered as the first crypto company to be climate positive, a step in the right direction.

When speaking to funds such as Janus Henderson they mention the need for more electrification within society to become more sustainable. Electrifying leads to connection between industry and technology and further promotes efficiency and growth toward a renewables future. This is an interesting thought, especially around digital currencies which are reliant on electricity and interconnected relationships between users.

So, could crypto currency or the technology behind it be an essential step toward the world becoming a more sustainable environment from renewable energy, and maybe a step towards a more transparent system? Only time will tell.